February 11: Day of Symbolism for South Africa and Egypt 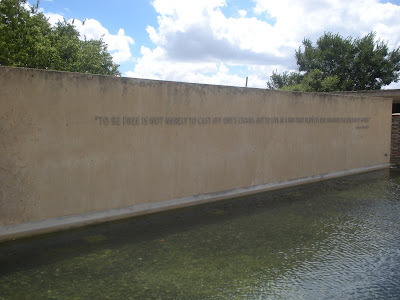 A friend from Zimbabwe spoke about the importance of symbols and symbolic dates pointing out the importance of today, February 11. 22 years ago today in 1990 a decrepit old man was released from prison after 27 years of incarceration. An entire country celebrated with joy and hope for the future. Just four years later this old man would be elected president of South Africa. His name is Nelson Mandela. At the same time one year ago today another old decrepit man was driven out of power by mass demonstrations and a disgruntled military. Egypt celebrated with joy and hope for the future. Today that same old man faces trial for the murder of hundreds of demonstrators. His name is Hosni Mubarak.

The main difference between the two men? One was freely elected and left power voluntarily respecting the country's constitution and the other made himself president for life and tried to set up his son as a successor. Nelson Mandela understood that "To be free is not merely to cast off one's chains, but to live in a way that respects and enhances the freedom of others." South Africans have deep gratitude for the example he set in the presidency.

Mandela has his faults. His loyalty to past supporters of the African National Congress such as Charles Taylor, Muammar Gaddafi, and Fidel Castro are shadows on the otherwise bright legacy of his presidency. Unfortunately, even great leaders do not always live up to their own principles. At the same time unlike the dictators he has legitimized Nelson Mandela left office after five years in power.

Two old men are similar images but how they dealt with power makes them profoundly different symbols. Hosni Mubarak for all his political talents is another African despot who tried to be president for life while Nelson Mandela is the man who defended democracy in South Africa and left office after serving a five year term in office.