"It has always been a mystery to me how men can feel themselves honoured by the humiliation of their fellow beings." - Mohandas Gandhi 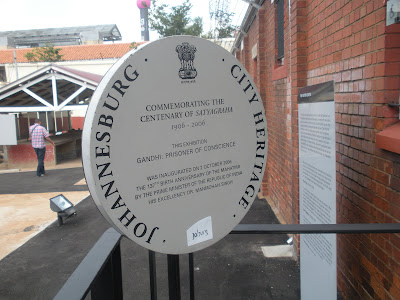 Gandhi: Prisoner of Conscience exhibition at Old Fort Prison Complex
Walking into the Old Fort Prison Complex on Constitution Hill that housed Mohandes Gandhi and stepping into his cell in number four prison. Listening to the description from the tour guide of how prisoners were treated over the years is something that one will not soon forget. Gandhi was first arrested on January 10, 1908 for refusing to carry an identification card also known as a "pass" in South Africa. It was not the last time he would be arrested in South Africa. Open toilets that faced the common eating area at the prison
The common eating area facing the public toilets which inmates were required to look at while eating their meals is an indication that the agenda was not merely incarceration but an attempt to inflict humiliation. Gandhi was also required to wear the uniform of a common prisoner. All attempts by prison authorities to humiliate Gandhi failed. 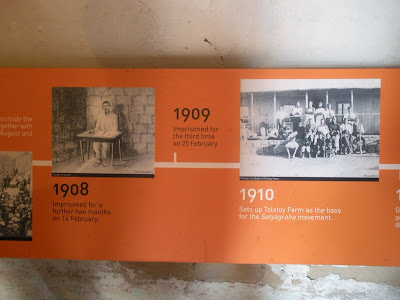 Part of the Gandhi Exhibition at Prison #4 at the Old Fort Prison Complex
The popular imagination places Gandhi's struggle in India, but often forgets that his apprenticeship in nonviolence began in South Africa not India. Arriving there in 1893, he would spend a total of 21 years in South Africa before returning to India in 1914. On February 16, 1903 he moved to Johannesburg. The word Satyagraha invented by Mohandas Gandhi and his movement on September 11, 1906 was announced to the world at the Empire Palace of Varieties Theater in Johannesburg, South Africa. Gandhi gave an account of how it came about:

Shri Maganlal Gandhi was one of the competitors and he suggested the word 'Sadagraha,' meaning 'firmness in a good cause.' I liked the word, but it did not fully represent the whole idea I wished it to connote. I therefore corrected it to 'Satyagraha.' Truth (Satya) implies love, and firmness (agraha) engenders and therefore serves as a synonym for force. I thus began to call the Indian movement 'Satyagraha,' that is to say, the Force which is born of Truth and Love or non-violence, and gave up the use of the phrase 'passive resistance,' in connection with it, so much so that even in English writing we often avoided it and used instead the word 'Satyagraha' itself or some other equivalent English phrase.

The theater was later torn down and the Ferreira House Apartments are now there on the corner of Commissioner, Fox & Ferreira Streets. A century later in South Africa the one hundredth anniversary of Satyagraha was celebrated with lectures, workshops and the opening of exhibitions. 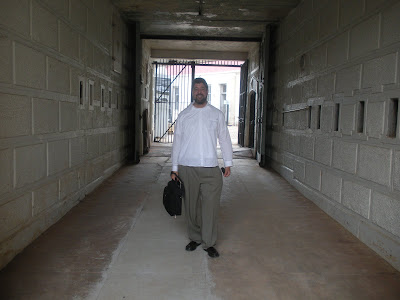 At the entrance to the Old Fort Prison Complex

Mohandas Gandhi in his Autobiography titled "My Experiments with Truth" described how he responded to being denied service at a barbershop in South Africa that gives an insight into the man:

I once went to an English barber in Pretoria. He refused to cut my hair. I was deeply insulted, but decided to buy a pair of scissors and cut my own hair in front of the mirror. I more or less managed to cut the front of my hair, but made a real mess of the back. My friends in court almost doubled up with laughter. "What on earth has happened to your hair Gandhi? Have rats been at it? "No", I said, "the white barber did not want to stoop so low as to handle my black hair. I decided, therefore, to cut it myself, regardless of the results." My answer didn't surprise my friends. The barber couldn't be criticized for refusing to cut my hair. He would have lost customers, had he cut the hair of coloreds. We (Indians) also do not allow our barbers to touch the hair of our untouchable brothers. I paid the price for this in South Africa, not once, but often, and the belief that this was the punishment for our own sins prevented me from being annoyed.

South Africa was Gandhi's training ground both inside and outside of prison.
Gandhi’s Johannesburg – "Birthplace of Satyagraha is a permanent exhibition at Museum Africa in Newtown. The museum, at 121 Bree Street, is open from Tuesdays to Fridays, from 9am to 5pm. Entrance is free and there is parking in Mary Fitzgerald Square."