An Epiphany on the upcoming Papal visit to Cuba

"You cultivate the essential virtues: high purpose, intelligence, decency, humility, fear of the Lord, and the passion for freedom." - William F. Buckley Jr. 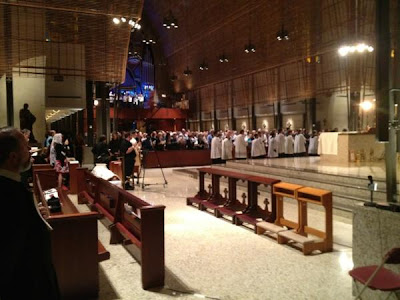 Pontifical Mass at the Church of the Epiphany
Thursday night February 2, 2012 at 7:30pm I was seated inside the Church of the Epiphany attending the first Pontifical Mass in Florida in 40 years presided over by the Archbishop of Miami Thomas Wenski. It was a Candlemas in the Extraordinary Form also known as The Purification of the Blessed Virgin Mary. It is the last day of the Christmas season. The Pontifical Mass lasted three hours. More than a thousand people participated in the Mass. Outside of the Church demonstrators gathered to protest the upcoming visit of Pope Benedict XVI to Cuba. In between prayers for a sick friend and the well being of friends and family members the Mass in Latin drew this participant further into spiritual reflection than the Mass normally does in the vernacular.

Archbishop Wenski's homily delivered in a steady and calm voice was powerful and stirring an excerpt is reproduced below:

Mary’s life – and our own lives – if we, like her, follow Jesus to the end, will be lived under the sign of the cross. For in a fallen world, in a world that has turned its back on God, those who live “ad orientam,” that is, looking, in joyful expectation, towards the coming of Our Lord, Jesus Christ, inevitably will encounter opposition and resistance. Such was the life of Christ – and such was the life of his mother who at Calvary shared in his sufferings; such is the life of the Church.

The “thoughts of many hearts” have been revealed in the betrayals and apostasies of the Church’s sinners but also in the constancy of her confessors, in the purity of her virgins and in the courage of her martyrs. Blessed John Paul II, when as Karol Wojtyla he preached a Lenten retreat to Pope Paul VI, said that “sign of contradiction” maybe be the “distinctive definition of Christ and his Church.”

Today, the witness of the Church on behalf of the dignity and right to life of the human person from the first moment of conception till natural death is itself a “sign that will be contradicted” – and is in fact contradicted in the present mandate of the Obama administration’s Department of Health and Human Services’ mandate to deny a religious exemption to Catholic institutions and thus force us to violate our consciences and to make us accomplices in evil.

Today’s feast of the Presentation of the Lord – thanks to the initiative of Blessed John Paul II – is also observed as the World Day of Prayer for Consecrated Life. Those who live their Christian baptism through vows of poverty, chastity and obedience as religious sisters, brothers and priests, should see the oblation of the Son of God presented today in the temple as the model for religious life. We pray for them – may their perseverance in seeking first the Kingdom of God above all else inspire all of us to seek to live holy lives in fidelity to the promises of our baptism.

The lighted candles carried in procession this evening are a sign of the divine splendor of the Christ who comes to expel the dark shadows of evil. May our lives as Catholics reflect the light of Christ to all who meet us; and may that same light guide us, as it guided that righteous and devout man, Simeon, when we go forth from this life to meet Christ.

The full homily is available online at the website of the Archdiocese of Miami and worth reading.

The following day I was invited to briefly address the Pope's visit to the island on a local television station giving me an opportunity to further reflect on it. Reading medieval scholar Carlos Eire on the subject offers historical context to what is happening in relations between the Church and the communist dictatorship in Cuba. At the same time reading Carlos Espinosa gives insights into the impact it is having within some families.

Although not as pessimistic about the Pope's visit to the island as the individuals who protested outside of the Church of the Epiphany one can understand their concern considering some of the historical and modern currents in the Catholic Church. There was a time that Liberation theology was on the upswing in the Catholic Church but Pope John Paul II put an end to that. In his sermon "An option for the poor" given in Mexico in 1990 His Holiness spoke plainly:

When the world begins to notice the clear failures of certain ideologies and systems, it seems all the more incomprehensible that certain sons of the Church in these lands - prompted at times by the desire to find quick solutions - persist in presenting as viable certain models whose failure is patent in other places in the world.

You, as priests, cannot be involved in activities which belong to the lay faithful, while through your service to the Church community you are called to cooperate with them by helping them study Church teachings...

...Be careful, then, not to accept nor allow a Vision of human life as conflict nor ideologies which propose class hatred and violence to be instilled in you; this includes those which try to hide under theological writings.

There are other currents within the Church that do give reason for encouragement. Pope Benedict XVI emerged from a current within the Church that has accomplished great things on behalf of orthodoxy and tradition. The question that Cuban exiles need to ask themselves is how to encourage and support those currents that will more robustly challenge the militant atheistic communist dictatorship in Cuba?

At the same time remembering that Pope Benedict XVI's visit to the island (March 26-28, 2012) will offer an opportunity for Cubans in large numbers to hear the Gospel and the message of hope and freedom that resides in it. The visit of Pope John Paul II that met with similar criticism at the time was, in spiritual terms, incredibly important to the millions of Cubans who heard his message and his exhortation not to be afraid and to be the protagonists of their own history.

Fourteen years later many Cubans who heeded his message are being persecuted for seeking change using ethical, nonviolent means. This is part of the legacy of John Paul II. It is no accident that the largest sustained dissident action was the Varela Project petition drive (named after a Cuban catholic priest) that obtained more than 25,000 signatures demanding fundamental changes to the Cuban constitution to bring it in line with international human rights standards. Nor is it an accident that the largest sustained opposition action are the weekly marches by the Ladies in White to attend Sunday Mass demanding their loved one's freedom. Since March of 2003 following the Black Cuban Spring these women have been subjected to acts of repudiation, physical assaults, and in the case of Laura Pollan - premature death at the hands of agents of the Cuban government.

One understands that the Pope will meet with sinners, possibly including Fidel Castro, excommunicated by John XXIII on January 3, 1962, but at the same time one would also hope that some of those who have suffered beatings, tortures and assaults on their dignity at the hands of this regime would also be ministered to by His Holiness.

At the same time one cannot forget that the Church in Cuba is a suffering Church that has endured decades of repression and has engaged in important evangelical and charitable work at the parish level that has saved countless souls and lives. 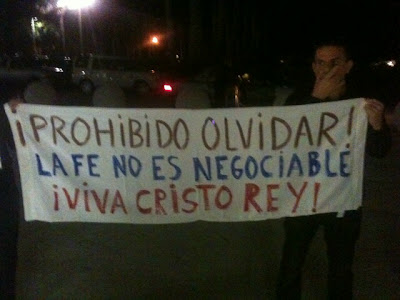 The protesters sign outside of the Mass on Thursday night said a profound truth that perhaps they did not themselves understand the full significance of: "We must not forget. Faith is not negotiable. Long live Christ the King!" The good works of the Church transcend the princes and principalities of this fallen world and calls all of humanity to Jesus Christ and his teachings as set out in the Bible as the only way to real freedom. Don't forget it. An epiphany long to be remembered.
Posted by John Suarez at 7:04 PM