Republic Cuba
Arrests of dissidents are escalating before the visit of the Pope
ISHR: Nervousness of the Cuban regime increases

Havana/ Frankfurt am Main (20th of February 2012) – As the International Society for Human Rights (ISHR) reports, around 30 members of the prisoner relief association “Ladies in White” were arrested on the 19th of February in the Eastern Cuban cities of Holguín, Santiago de Cuba and Guantanamo, in order to prevent them from participating in the Sunday Mass and from doing protest marches for the release of political prisoners. Sara Marta Fonseca, of the “Ladies in White” and of the “Pro Human Rights” party that was forbidden by the regime, was arrested on her way to Mass in Havana, 12 members of the oppositional “Patriotic Union of Cuba” were arrested in Palma Soriano, only two protesters have already been released. ISHR sees a direct relationship between the new wave of political arrests in Cuba and the planned visit of the Pope from the 26th until the 28th of March.

According to ISHR, 16 “Ladies in White” managed to get from their hometown Palma Soriano to El Cobre – despite all the reprisals of the Castro regime – in order to take part in the Sunday Mass of the church of pilgrimage El Cobre and to pray for the release of all political prisoners like every Sunday. But when they got the message that civil servants of the state security were waiting on their way back for them, in order to arrest them – 14 “Ladies in White” stayed in the church and went home hours later accompanied and under protection by representatives of the Catholic Church. 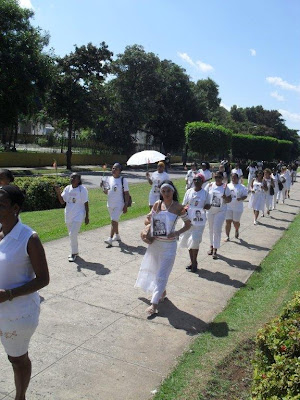 Ladies in White marching on February 19, 2012.
Photo by Ivan Hernandez Carrillo
Authorities inhibit meeting between bishop and “Lady in White”
The independent journalist and “Lady in White” Caridad Caballero Batista and her family were - by her own account – prevented from participating in the mass, threatened, maltreated and arrested by civil servants of the Cuban state security on six Sundays in a row. To end these reprisals, Caballero Batista arranged a meeting with the bishop of the Eastern Cuban city of Holguín for the 17th of February. On this day, her house was observed till the early morning and policemen prevented her from going on the street. Moreover a meeting of the “Ladies in White”, that had been planned for this day, couldn't take place.

According to ISHR, the Castro regime is afraid of negative press reports more than ever. Amongst others the telephone line of the independent journalist and former political prisoner José Daniel Ferrer García, member of the UNPACU, was lopped, in order to prevent him from sending reports about human rights violations in Cuba to media abroad. The former political prisoner and doctor Dr. Oscar Elías Bíscet demanded in an interview with the department for foreign relations of the US-House of Representatives on Pope Benedict XVI., to use his power and position to point at human rights abuses in Cuba and at the political repression of the Castro regime.

More information about the human rights situation in the Republic Cuba:
http://www.igfm.de/Kuba.456.0.html

Facebook-page of the International Society for Human Rights:
https://www.facebook.com/igfmdeutschland

Translation to English from the original German by Christine Pierk