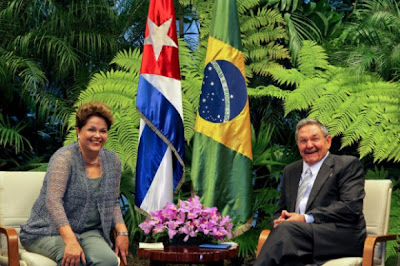 Dilma Rousseff and Raul Castro in Havana 2012
Over emphasizing and romanticizing the importance of political violence while remaining mute on the Castro regime's torture and extrajudicial execution of opposition figures along with its role in fomenting political violence and terrorism internationally is a difficult task but Julia Sweig, the director of the Latin America program at the Council on Foreign Relations (CFR) manages to do so in the February 1, 2012 article by Matthew Bristow in Bloomberg titled "Dissident blogger says Cuba wanted more on human rights from Rousseff trip":“Yoani’s situation bears zero comparison to what Dilma went through. Unlike Dilma, she hasn’t been and won’t be jailed or tortured and I seriously doubt she’s going to be president of Cuba.” 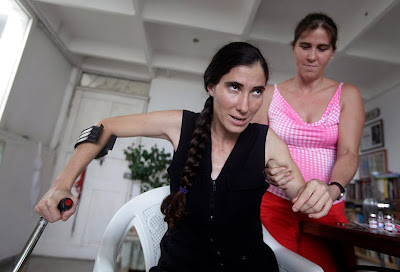 Yoani Sanchez shortly after 2009 abduction and attack
On November 6, 2009 Yoani Sanchez was kidnapped and beaten up by Cuban state security agents. Other Cuban women have suffered greater abuses for being members of the Ladies in White or simply demanding democratic reforms. They have suffered harassment, beatings, arbitrary detentions and in the case of Laura Pollan what amounts to a very sophisticated form of torture that resulted in her death on October 14, 2011 in at what best could be described as "purposeful medical neglect." She is not the only one. 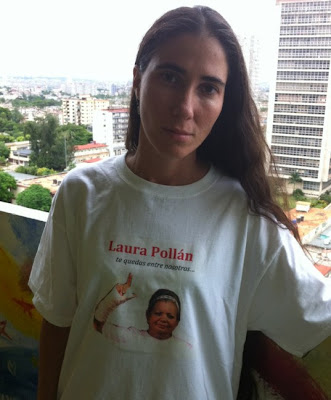 Yoani Sanchez wearing a t-shirt with image of the late Laura Pollan
To say that Yoani Sanchez will not be arrested in the future or possibly subjected to torture is to ignore 53 years of history under the Castro brothers, but then again Professor Sweig has been known to overlook the Castro regime's history. One example is found on page XIV of the acknowledgements of her May 2002 book Inside the Cuban Revolution: Fidel Castro and the Urban Underground Julia Sweig lists a number of people who assisted her in writing the book. Two names stand out: Elsa Montera Maldonado and Jose Gomez Abad who Sweig described as championing the project. This husband and wife team were working as Cuban diplomats at the Cuba Mission in New York City but were in reality State Security agents. Both were expelled for their role in a planned terrorist attack on the Friday after Thanksgiving in 1962 with the objective of detonating 500 kilos of explosives inside Macy’s, Gimbel’s, Bloomingdale’s and Manhattan’s Grand Central Terminal. 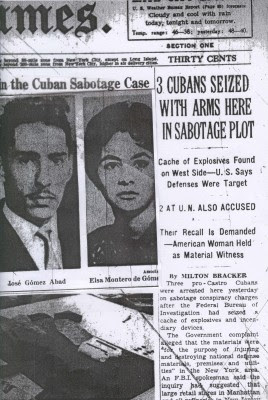 Cuban diplomats/terrorists and "champions" of Julia Sweig of the Council on Foreign Relations
Yoani Sanchez has empowered other Cubans with knowledge of how to circumvent regime controls and speak to the world. She took a leading role in a campaign in 2008 to seek the freedom of Cuban punk rocker Gorki Aguila who faced prison for his punk attitude and political lyrics. Finally she has provided an unfiltered perspective on what Cubans are going through on the island. She is also demonstrating first hand the power of "living in truth" as a free Cuban in Cuba today despite being denied the right to travel outside of her country on 19 occasions. The irony that on this 19th occasion she received a visa from Brazil last month to travel there to attend the premiere of a documentary on media freedom in Cuba. The denial came shortly after a visit by the Brazilian president who when asked about it said that "Brazil gave the visa to the blogger. The rest is not a matter for the Brazilian government". Apparently, President Rousseff does not view as an international matter Article 13 subsection 2 of the Universal Declaration of Human Rights which states:

"Everyone has the right to leave any country, including his own, and to return to his country."

Dilma Rousseff, as a young women in the late 1960s was inspired to take up arms against a right wing military dictatorship. The military had overthrown a democratically elected left wing president out of fear that he would turn Brazil into another Cuba. Opposition to military rule split into two strategies one violent and the other nonviolent. 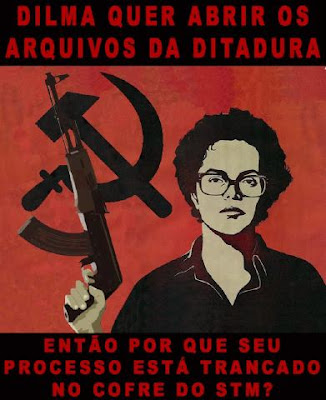 Iconic poster of Rousseff's guerilla past
Rousseff, although claiming not to have fired on the police or military, does admit to having been a member of the "National Liberation Command" (NLC) which is described in the same terms as the Red Army Faction, a German left wing terror group. The magazine, Piauí, says that despite her denials now that she handled weapons for the group. The NLC was inspired by the Organization of Solidarity with the People of Asia, Africa and Latin America (Organización de Solidaridad con los Pueblos de Asia, África y América Latina)[OSPAAAL]that was founded by the Castro brothers and Che Guevara at the 1966 Tricontinental meeting in Havana.

Fidel Castro and Che Guevara's example are what led Dilma Rousseff to join an organization that robbed banks and assassinated police officers that ended with most of her compatriots dead or in prison. Dilma wound up captured, tortured over 22 days and put on trial then prison between 1970 and 1972. The violent option in Brazil was crushed. 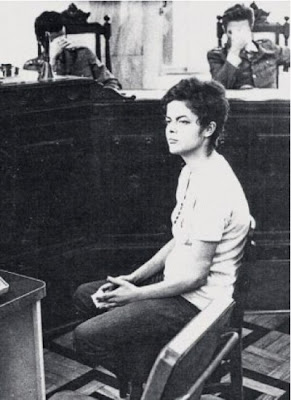 Dilma Rousseff in the dock in 1970
What ended the military dictatorship? A nonviolent political opposition able to build coalitions and with a worsening economy pressure the military into transitioning back to democracy.

It was not Dilma Rousseff's guerrilla past that got her elected president but her talents as an efficient administrator in the Lula government that raised her profile nationally and got the attention of the voters.

Dilma Rousseff is no Lech Walesa nor a Vaclav Havel. Yoani Sanchez with her embrace of nonviolence, rejecting hatred and risking everything to express herself follows more closely in their tradition. 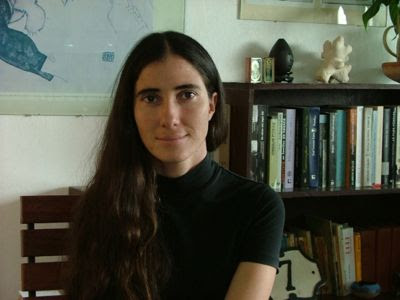 Yoani Sanchez is no Dilma Rousseff. Thank goodness.
Professor Sweig is half right Yoani Sanchez bears zero comparison with Dilma Rousseff. Her choices as a young woman are not only morally far superior but have also been much more effective in empowering her fellow citizens for a democratic change than the sterile path chosen to confront the military dictatorship by Rousseff. Also it doesn't take much courage to attack the human rights record of the United States raising the issue of Guantanamo while ignoring human rights violations in Cuba while in the island meeting with Cuban officials. Not exactly a profile in courage. 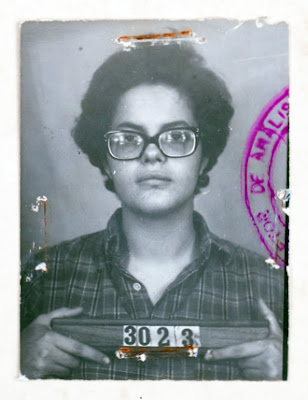 Dilma Rousseff's 1970 mugshot
Thankfully, the democratic institutions and political currents that pressured the military into a democratic opening and now pressured the granting of the visa to Yoani Sanchez should also keep the current president from allowing her admiration and pride in meeting with Fidel Castro from turning into a dark chapter for Brazilian democracy as Hugo Chavez has been for democracy in Venezuela. 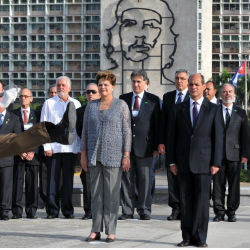