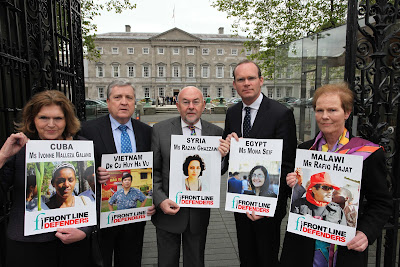 BIOGRAPHIES OF NOMINEES SHORTLISTED FOR 2012 FRONT LINE DEFENDERS AWARD FOR HUMAN RIGHTS DEFENDERS AT RISK
Rafiq Hajat, Director of the Institute for Policy Interaction (IPI), is one of the leading human rights defenders in Malawi where the Government has been seeking to repress protests and silence all critical voices. On 3 September 2011, at 1 am approximately, a petrol bomb was thrown through the window of the IPI office in the Chichiri area of Blantyre, following which the front room of the building caught fire resulting in extensive damage. Rafiq Hajat has been publicly accused by former President Bingu wa Mutharika of being an enemy of the state and he has been forced to go into hiding. However, in spite of the threats against him he has continued to speak out about human rights violations in Malawi.
In Cuba, Ivonne Mallezo Galano has been repeatedly detained by the authorities for promoting human rights and democracy. On 30th November 2011 following a peaceful protest in the Fraternidad Park in Havana where she was part of a group that displayed a white sheet that read: “Down with Hunger, Misery, and Poverty”. She was subjected to 51 days of cruel and degrading treatment in prison before her release on January 20, 2012. Two days after her release in January she was back together with the Ladies in White (Damas de Blanca) participating in their regular Sunday march on 22nd January in the streets of Havana. During the recent visit of the Pope to Cuba, Ivonne was one of the human rights defenders rounded up and detained throughout the pontiff’s visit.
Dr Cu Huy Ha Vu was sentenced to seven years in prison in April 2011 following an unfair trial on charges of “propaganda against the Socialist Republic of Vietnam." He had been arrested on 4 November 2010 and held incommunicado following his involvement in a number of high profile legal cases including two cases against the Vietnamese Prime Minister Nguyen Tan Dung in relation to bauxite mining in Vietnam’s Central Highlands as well as a case relating to the arrest of a number of Catholic church members who were participating in a funeral procession on disputed land. Both lawsuits against the Prime Minister were posted on the Bauxite Vietnam website and reposted on several others.
When former Egyptian President Hosni Mubarak stepped down after weeks of mass public protest, the Supreme Council of the Armed Forces of Egypt (known as SCAF) assumed power. After being part of the Tahrir protests, Mona Seif, normally cancer research lab worker, started a movement taking on the SCAF and its widespread use of military trials of civilians. The 'No Military Trials' movement has been a galvanising force among Egyptian revolutionaries, but has also taken on the challenge of exposing the SCAF regime’s crimes against detainees. Through written and video testimonies, her Tahrir Diaries blog seeks to reveal the military’s abuses against the revolution they once claimed to be saving.
Razan Ghazzawi is a tireless defender of human rights, not only in her native Syria but throughout the Arab world and beyond. She is an active blogger who also works for the Syrian Centre for Media and Free Expression advocating for journalists and bloggers under threat in Syria and the rest of the region. For this she has been detained and is currently facing trial. She has stood up for minority rights, including equal rights for Palestinians. Most recenty she has worked documenting abuses by the Syrian Government. She was first arrested in December, when she was on her way to a regional meeting on media in the Arab world hosted in Amman.  Following a grassroots social media campaign, she was released shortly afterwards.  In February, the Syrian authorities raided the offices of the SCM and arrested Razan and her colleagues.  They currently face a military trial in an attempt to crackdown on free speech activists and restrict the flow of information out of Syria.
Original post at http://www.frontlinedefenders.org/node/18327