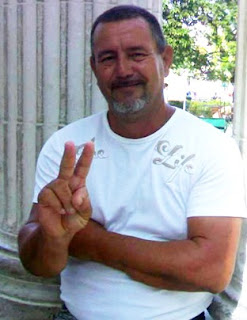 On Thursday May 5, 2011 at approximately 9am, two national police officers reportedly approached Juan Wilfredo Soto García in Leoncio Vidal Park, asked him for his ID and then asked him to leave the park. After refusing to comply and protesting verbally against the expulsion, he was allegedly cuffed with his hands behind his back then beaten with batons.

Juan Wilfredo Soto García was arrested and detained at a police station, then hospitalized later that day. He was released from the hospital the same afternoon only to return the following day, complaining of severe back pain. Juan Wilfredo was then admitted to the Intensive Care Unit and died in the early hours of Sunday morning, May 8, 2011.He died on Mother's Day.

A local source told Amnesty International that, by chance, he met Soto García as he was going to the hospital on May 5th. According to the source, Soto García said "I just got a beating in the park with batons and I’ve got a very sore back. These people killed me." Hospital sources have reportedly stated he died from acute pancreatitis, a condition which can be triggered by abdominal trauma and commonly causes severe back pain. Juan Wilfredo Soto García, 46, belonged to the Central Opposition Coalition (Coalición Central Opositora) and the previously unrecognized opposition organization Foro Antitotalitario Unido, (United Anti-totalitarian Forum) and according to Amnesty International Juan Wilfredo "had previously been imprisoned for 12 years for his political activities."


Prior to his beating and death, Juan Wilfredo Soto García described threats made against his life by Cuban state security agents (In Spanish).

Parallel to the Cuban dissident's death, an effort to deny both his past human rights activism; the circumstances surrounding Juan Wilfredo's extrajudicial killing and the dictatorship's complicity by an extensive propaganda campaign combined with  the blunt intimidation of the family of the victim.  Amnesty International called for an investigation into his death which over a year later has not been conducted.  The Cuban dictatorship has sought to deny Juan Wilfredo Soto García's status as a former political prisoner and human rights defender in order to portray him as a common criminal. They've done it both before with numerous victims of the regime and after Juan Wilfredo's death with two later regime victims: Ladies in White founder, Laura Pollán who died under mysterious circumstances on October 14, 2011 and  Cuban dissident Wilmar Villar Mendoza who died on hunger strike on January 19, 2012. It is a standard operating procedure of totalitarian regime's like the one operating in Cuba. Not only do they physically kill you but also slander and attempt to marginalize your importance and if possible make you a nonperson.

In addition to Amnesty International, 12 former Cuban prisoners of conscience from the 2003 Black Cuban Spring met on Saturday, June 4, 2011 and petitioned the Cuban regime for an independent investigation into the May 8, 2011 death of Juan Wilfredo Soto García in a document called The Declaration of El Roque. Others continue to badly beaten and denied adequate medical care in Cuba and their lives remain at risk. It is for that reason and the continuing demand of justice for Juan Wilfredo Soto García that we must never forget.