Reading the article by Luisita Lopez Torregrosa, "Cuba May Be the Most Feminist Country in Latin America" in the International Herald Tribune on May 1, 2012, raises a number of questions.

Cuban female icon, Laura Inés Pollán Toledo, who could have been a future president of a democratic Cuba, died under mysterious circumstances on October 14, 2011 interviewed above prior to her untimely death.

Between 1959 and the present date the Castro brothers have ruled Cuba in the longest lasting dictatorship in Latin America. The Cuban parliament has no real power other than to rubber stamp the decisions of the Castro brothers. Meanwhile throughout Latin America women have been elected to the presidency of their respective countries: In Argentina, Cristina Fernández de Kirchner entered office on December 10, 2007; In Brazil, Dilma Rousseff was elected on October 31, 2010; In Chile, Michelle Bachelet was elected on March 11, 2006; In Costa Rica, Laura Chinchilla Miranda was elected on May 8, 2010; In Nicaragua Violeta Chamorro entered office on April 25, 1990. How can one claim that women have a greater level of political participation in government if they have no political power and are, like their male counterparts, rubber stamping decisions by the Castro brothers?


"There are no women forced to sell themselves to a man, to a foreigner, to a tourist. Those who do so do it on their own, voluntarily, and without any need for it. We can say that they are highly educated hookers and quite healthy, because we are the country with the lowest number of AIDS cases. There are nearby countries which have tens of thousands of AIDS cases. Therefore, there is truly no tourism healthier than Cuba's."

The jobs sought after in Cuba are the ones that place Cubans in contact with foreigners with hard currency. Professionals in the state sector depending on pesos literally go hungry. That a majority of them are women is tragic. Considering this reality how can one view as an advance the choices left to women in the socialist Cuban economy? 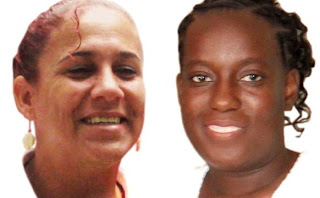 Finally, the plight of women who attempt to exercise real political power and an authentic voice demonstrates that the dictatorship is both violent and patriarchal. Independent women's organizations such as the Ladies in White have been repeatedly physically assaulted by Cuban government agents. This movement founded in March of 2003 following a regime crackdown on nonviolent opponents forced the dictatorship to the negotiating table in 2010. The founding leader of this movement, Laura Inés Pollán Toledo, who could have been a future president of a democratic Cuba, died under mysterious circumstances on October 14, 2011. Other women have been repeatedly beaten up, brutalized and threatened with rape to  dissuade them from participating in the political and social life of the country. How on Earth can this be considered pro-woman?

Two Ladies in White are currently in prison for their nonviolent activities in defense of human rights. They have suffered beatings and mistreatment. Their names are Sonia Garro Alfonso and Niurka Luque Alvarez. Niurka has epilepsy and is suffering numerous epileptic attacks because prison officials refuse to provide her with medication to stop the attacks and also do not permit family members to give her the needed medicine. Why do women's experts remain silent when women are being mistreated?

Finally, the name of Walter Duranty immediately came to mind. It is important to point out that The International Herald Tribune is the global edition of The New York Times. Although it may be on a smaller scale history repeats itself at the Grey Lady. Eight decades ago Walter Duranty, an employee of the New York Times assisted in covering up the crimes of Josef Stalin. He was The New York Times's man in Moscow. To avoid being expelled from the Soviet Union, he regurgitated Stalinist propaganda and downplayed the atrocities taking place there. Duranty received the Pulitzer Prize in 1932 and only decades later would the world finally learn the truth that more than 10 million people had died in a genocide in the Ukraine despite the efforts of the New York Times reporter in covering it up. Although Stalin's surviving victims sought to have the prize revoked, the Pulitzer Prize board refused to do it.

Today, in Cuba although thankfully the body count is smaller than Josef Stalin's it is still rising and lamentably the defenders of another tyrant continue to extol the virtues of the dictatorship while ignoring or denigrating the victims. Unfortunately, the Duranty legacy is alive and well in the American media. Guess that answers a lot of the previously raised questions.