Lessons from the Embargo on Apartheid South Africa for Castroite Cuba pt. 1

"Astonishingly, it is argued that strengthening the economic basis of the white apartheid regime will in fact bring change. This is nonsense, and those who speak it know it ... Continued American investment in South Africa in any form is continued American support for the regime in power. Those who wish to support change in South Africa have only two ways to do it: (1) active assistance to the liberation movement; (2) a call for United States economic disinvestment and political disengagement from the present South African state. The rest is sophistry." - Immanuel Wallerstein, co-chairman of the Association of Concerned Africa Scholars (1977) 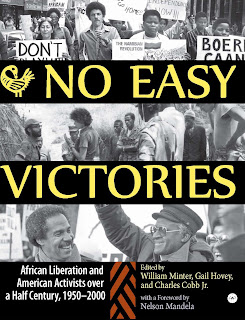 The quote above is taken from a book that every activist who supports the Embargo on Cuba should read and it is available online in pdf format. Ironically, it is a book recommended by Castro regime apologist Danny Glover, it is titled No Easy Victories: African Liberation and American Activists over a Half Century, 1950-2000. Now for the folks who argue that the sanctions approach hasn't worked in 53 years they should also recall that the African National Congress (ANC) was founded in 1912 to combat systematic racism in South Africa and only succeeded in this goal 82 years later in 1994. Mind you it got worse before it got better. Apartheid came into existence 36 years after the founding of the ANC.  It took decades for South African economic sanctions to make an impact.

South Africa and Cuba have profoundly different histories and experiences.  South Africa throughout the 20th Century would be a country defined by racial segregation taken to its most extreme form in the creation of an Apartheid state that sought to completely separate South  Africans along racial lines while systematically seeking to humiliate, degrade and dominate the black majority. In Cuba and South Africa, the 20th century is divided in two. In Cuba, a flawed democratic republic with authoritarian interruptions between 1902-1952 followed by the dictatorship of Fulgencio Batista (1952-1958) and the arrival of a tropical form of Stalinist communism through the betrayal of the promises of democratic restoration by Fidel Castro (1959 - Present). In South Africa, independence arrived in a de facto form in 1931 and on May 3, 1961 in a whites only referendum South Africa became a Republic and left the British Commonwealth. Apartheid was put into place with a series of laws in 1948 and continued until 1994. In both Cuba and South Africa large numbers of people were killed struggling for both their freedom and dignity and the opposition struggled to develop a coherent strategy.

Despite these differences there is much that Cubans can learn from the South African experience, the following are some highlights summarized below.
The main difference with regards to economic sanctions on Cuba and South Africa is that the first was imposed by the United States government on Cuba due to Cold War considerations while in South Africa it was due to a sustained national and international grassroots campaign with a majority in agreement both in the diaspora and in South Africa to push for sanctions. The Cuban opposition never had to have that conversation or organized effort to lobby for the need to impose sanctions on the Castro regime. However, now that the Cold War has been over since 1991 and sanctions are a subject for how best to insure a democratic transition it is now sorely needed.