"There is no forgiveness for acts of hatred. Daggers thrust in the name of liberty are thrust into liberty's heart." - Jose Marti 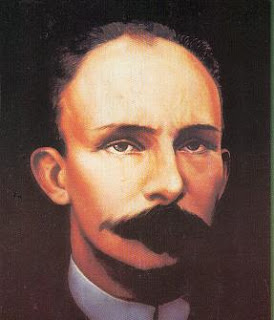 José Martí was killed in battle against Spanish troops at the Battle of Dos Ríos, near the confluence of the rivers Contramaestre and Cauto, on May 19, 1895. He is buried in the Santa Efigenia Cemetery in Santiago de Cuba. Cubans the world over honor his memory and Cuban independence follows a day later. Seven years and one day after Martí's death Cuba formally obtained its independence on May 20, 1902.

Cubans across the ideological divide claim José Martí as their own. The claims of the dictatorship led by the Castro brothers that Martí is the intellectual author of their political project is ironic considering that the life and writings of this Cuban patriot is the antithesis of the Castro regime.

117 years after his death in battle, the regime that claims him as their inspiration sent thugs to surround the home of a nonviolent activist, Idania Yánez Contreras, carrying out an "act of repudiation" in an act of psychological terrorism against her and her family. It was too much for Idania's grandmother, Antonia Rodríguez, who suffered a cerebral hemorrhage on May 18 due to a drastic rise in blood pressure and died the following day on May 19. These violent acts by the dictatorship started on Wednesday, May 16, 2012  under the direction of the Lieutenant Colonel Regino, along with other agents. The soldiers made obscene gestures and shouted obscenities. Jorge Luis García Pérez ‘Antúnez’ (@antunezcuba) tweeted what was taking place as it happened and published the photos via twitter. The photos showed officials grabbing their genitals and screaming insults at the women gathered there. In addition to the psychological assault the mob began throwing rocks at the home and one of the rocks made it inside hitting Idania's mother, Aramilda Contreras.

The life and death of the Cuban poet, journalist, and independence leader who proclaimed that "It is necessary to make virtue fashionable," would have condemned the behavior of these regime agents.  José Martí believed that "Peace demands of Nature the recognition of human rights." A 53 year old dictatorship that rejects fundamental human rights is the antithesis of what he fought and died for.

Furthermore, he proclaimed the idea that "One just principle from the depths of a cave is more powerful than an army." A principle shared not only by dissidents in Cuba but also echoed by Vaclav Havel one of the dissidents who had an important role in ending Communism in Eastern Europe in the1989: "I really do inhabit a system in which words are capable of shaking the entire structure of government, where words can prove mightier than ten military divisions."

In José Martí's writings the reader finds a man who loved freedom, rejected hatred -even of one's enemy- and only embraced violent conflict as a last resort. One wonders if instead of riding into battle on horseback if he would've been the trailblazer of nonviolent resistance. What would have Cuba's political culture been like if as in the case of Havel the Cuban poet and writer would've lived to have been president and guide the new republic in the first years of its existence?

In this thought experiment of one thing we can be sure, José Martí and his later political disciples would not be sending soldiers to grab their genitals, throw rocks at elderly mothers, and precipitate a grandmother's death by stroke after days of terrorizing her and her family. Both the persons who order these despicable actions and those who carry them out degrade and debase themselves in performing hateful and evil acts. The diabolical goal of this behavior beyond the obvious terrorism is to implant hatred into the adversary.

Its been said that when a friend betrayed him to the police José Martí sent him the following poem:

It translates to English as follows:

I cultivate a white rose
In July as in January
For the sincere friend
Who gives me his hand frankly.

And for the cruel person who tears out
The heart with which I live,
I cultivate neither nettles nor thorns:

I cultivate a white rose.

Antonia Rodríguez and José Martí died on the same day 117 years apart under different circumstances that highlight the fact that Cuba in 2012 is not the Cuba that the Cuban independence leader bled and died for in 1895.