"We are not going to stop. If they have imprisoned our sisters thinking that we would give up, they are mistaken." - Laura Pollán

On Mothers Day in Cuba the Ladies in White,  paid tribute to Laura Pollán, one of the founders of the organization who died under mysterious circumstances on October 14, 2011. Despite threats, harassment, and scores of women detained by State Security 68 Ladies in White following mass walked through Fifth Avenue in the west of Havana. They marched and chanted Viva Laura Pollán!" and "Freedom for the political prisoners!" 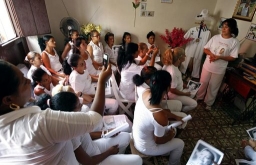 Literary Tea on Saturday in Havana

Berta Soler, the current leader of the Ladies in White, described how the homage for Laura Pollán began the day before on Saturday with a literary tea at the home of the deceased founding leader. The home located in central Havana, thanks to Laura's widower, has now been turned into the organization's  headquarters. She also described how the regime had organized a "party" for Mothers Day on Saturday just outside of the home to disrupt their activity describing it as a provocation.

More sinisterly scores of members of the Ladies in White were taken by State Security into detention their whereabouts unknown over the past week and including today. Sara Marta Fonseca managed to tweet at 8:48am on Mothers Day: "They take me away detained." This latest wave of detentions started days ago, in anticipation of Mothers Day.

Ladies in White marching on Sunday

Jose Daniel Ferrer tweeted on Friday, May 11 that  Ladies in White, Alina Fonseca and Milagros Leyva were still jailed in Santiago de Cuba for attempting to travel to Havana. Alina had been detained since May 7, 2012. On May 8, 2012 Jose Daniel reported that a Major in State Security (G2) going by the name "Dorky" told various Ladies in White that they would only allow five of them to arrive in Havana for the Mothers Day activities. State Security mounted an operation to harass, block and detain women trying to leave to Havana to join up with the Ladies in White. Nevertheless 23 women arrived in Havana from Santiago to take part in the activities.

Later today, tweets appeared concerning some of the women who had been detained and were left by State Security up to 20 kilometers (12.4 miles) from their homes to find their way back in a country in which it is notoriously difficult to get around.  The names of two subjected to this mistreatment were tweeted by Hablemos Press: Sandra Guerra and Claribel Rodriguez.

The treatment of Cuban women under the Castro regime has been and continues to be shameful. On May 3rd a Cuban mother was threatened over several hours by thugs, instigated by State Security, that her 5 year old daughter would be raped. 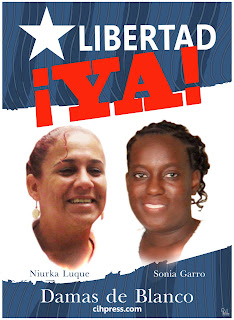 It is also important to remember that Cuban mothers are spending Mothers Day in prison for defending the human rights of the Cuban people. Two of them: Sonia Garro and Niurka Luque have been in prison since March 2012.  Cuban mothers are forging the path to a free Cuba one step at a time walking for their children's freedom.