"Reconciliation should be accompanied by justice, otherwise it will not last. While we all hope for peace it shouldn't be peace at any cost but peace based on principle, on justice." - Corazon Aquino 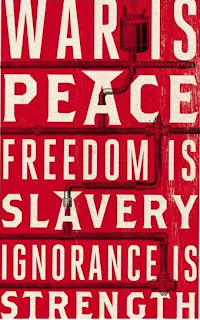 In the struggle against the totalitarian regime in Cuba the battle is one not only of power but also of ideas and definitions. Totalitarian regimes throughout history have sought to empty words of their meanings and often times tried to turn them into their opposites. George Orwell best described this process in his novel 1984 in which the fictional regime's slogans were contradictions: WAR IS PEACE, FREEDOM IS SLAVERY, and IGNORANCE IS STRENGTH. We are witnessing an effort to create a new contradictory slogan in the Cuban context: RECONCILIATION IS COLLABORATION. As someone who believes in authentic reconciliation and has spoken about it time and time again this campaign to turn it into an oxymoron is profoundly offensive.

Scott Richert in About Catholicism describes how the Sacrament of Confession is also known as the Sacrament of Reconciliation explaining that: "Whereas "Confession" stresses the action of the believer in the sacrament, "Reconciliation" stresses the action of God, who uses the sacrament to reconcile us to Himself by restoring sanctifying grace in our souls." Yale Professor Carlos Eire echoing Richert has written an important essay explaining exactly what reconciliation is within a Catholic context and the error surrounding shifting its meaning and how Catholic teaching actually defines the word as a process of repentance:


"Interior repentance is a radical reorientation of our whole life, a return, a conversion to God with all our heart, an end of sin, a turning away from evil, with repugnance toward the evil actions we have committed. At the same time it entails the desire and resolution to change one's life, with hope in God's mercy and trust in the help of his grace. This conversion of heart is accompanied by a salutary pain and sadness which the Fathers called animi cruciatus (affliction of spirit) and compunctio cordis (repentance of heart)."

The Cuban democratic opposition inside the island has spoken about the need for reconciliation and, despite the claims made by Cardinal Ortega, so have exile leaders such as the late Monsignor Agustin Roman.


We propose to proclaim the 18th of March as the National Day of Fasting for Freedom of all captives for Motives of Politics and Conscience, for the end to the discord among Cubans, and the beginning of reconciliation and peaceful changes to democracy that the country needs.

These imprisoned activists are following a path followed by nonviolent activists around the world and through time. For the sake of brevity will only cite the Reverend Martin Luther King Jr. who in his first book published in 1958, Stride Toward Freedom claimed that nonviolent resistance, as he practiced it, was based in six principles:


(1.) Nonviolence is not passive, but requires courage;

In a later book titled Why We Can't Wait (1964) he explained why African Americans could not wait for White Americans to decide to give them their rights. In the 1950s, Martin Luther King Jr. did not council passivity and accommodation with those in power and in a 1957 interview emphasized the importance of being aggressive in confronting injustice as a necessary stage from the old unjust order to a new order based in justice in freedom:


However, this aggressiveness still embodied the six principles listed above as Reverend King stated in the same interview:


"All of the gains made that we received in the area of civil rights have come about because the Negro stood up courageously for these rights and he was willing to aggressively press on. So I would think that it would be much better in the long run to stand up and be aggressive with understanding, good will and with a sense of discipline. Yet these things should not be substitutes for pressing on and with this aggressive attitude. I believe we will bring the gains or other civil rights into being much sooner than just standing idly by waiting for these things to be given voluntarily.”

The Cuban opposition that is aggressively advocating for change using nonviolent means to bring a halt to injustice and violence are following in the same foot steps as the Reverend Martin Luther King Jr. who himself was inspired both by Jesus Christ and Mohandas Gandhi.

Bishop Agustin Roman in a December 16, 2006 speech to Cuban exiles in Miami on The importance of the current internal dissident movement in Cuba spoke of reconciliation:

Justice, truth, forgiveness and reconciliation. I said earlier that the cause of the internal dissident movement, the cause of all of us in the end, is the continued pursuit of justice for the Cuban people. Cuba cries out to heaven for justice, justice is essential. The truth is the complement of justice and should be the first condition of our work and firm foundation of the society. Every Cuban will recognize the truth of their responsibilities and errors if we want to enter the new Cuba with the cleanness that we want. At the same time, the country equally needs of forgiveness and reconciliation in order to have possibilities of a future. A society that remains with its wounds permanently open condemns itself to a continuation of its conflicts and eliminates its possibilities to live in peace. Justice, truth, forgiveness and reconciliation are not mutually exclusive or contradictory terms. Our very remembered Pope John Paul II said with respect to the following, in his message for World Day of Peace on 1 January 1997. I quote: "Forgiveness, far from excluding the search for truth, demands it. The wrong must be recognized and, where possible, repaired ... Another essential requisite for forgiveness and reconciliation, is justice, which finds its justification in the law of God ... In effect - the Pontiff added - forgiveness does not eliminate or decreases the demand for reparation, which belongs to justice, but seeks to reintegrate equally individuals and groups into society. "End of quote.


His Holiness Pope John Paul II, referenced above by Bishop Roman, also spoke of reconciliation during his visit to Cuba in 1998 and in his Homily in Santiago de Cuba on January 24, 1998 states:


The Church calls everyone to make faith a reality in their lives, as the best path to the integral development of the human being, created in the image and likeness of God, and for attaining true freedom, which includes the recognition of human rights and social justice. In this regard, lay Catholics — holding to their specific role as lay persons so that they may be "salt and leaven" in the midst of the society of which they are part — have the duty and the right to participate in public debate on the basis of equality and in an attitude of dialogue and reconciliation.


"I could have easily executed the man who killed my family. The only picture of that man is the one I took a picture of. I knew where he lived. Despite that I didn't do it. The government itself directed me towards him. They wanted to turn me into a criminal. The regime sought to justify what it had first said. The regime had said that a group of anti-socials had stolen the boat and that there were an undetermined number of victims. If you look at the photographs and the profiles there were no 'anti-social elements.' What were there were entire families. I told the man that he would have to face trial that it might not be me but my son. It might take generations but there would be justice."

The dictatorship in Cuba preferred that blood be spilled in an act of revenge that would morally compromise a victim rather than provide justice through a court of law.  The refusal of Jorge Garcia to engage in physical violence and his rejection of hatred is a profoundly Christian response, but the actions of the current regime in Cuba to tempt an innocent man is profoundly anti-Christian and is the antithesis of reconciliation. Asking Cubans to collaborate in their own oppression while remaining silent before ongoing injustices is also the opposite of reconciliation.