On September 23, 2011 in the later afternoon Ambassador Alfred H. Moses gave concluding remarks for the Summit highlighting speakers and ideas over the two days of the We Have a Dream: Global Summit Against Discrimination and Persecution. He concluded by announcing the declaration below. 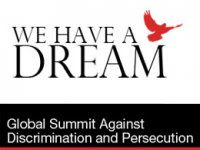 We, former prisoners of conscience, dissidents, victims of torture, persecution, and repression, fighters for freedom, democracy and the dignity of all human beings, gathered here at United Nations Headquarters in New York City, on 22 September 2011, do hereby declare:

Seventy years ago this week, in the face of Nazi tyranny, nations gathered in London to proclaim the Four Freedoms of the Atlantic Charter that are the birthright of all human beings and the hallmarks of democratic society: Freedom of speech and of belief, freedom from fear and from want. These four freedoms form the preamble of the Universal Declaration of Human Rights.

Two decades ago, the Soviet Union, the other great tyranny of the twentieth century, collapsed amidst the cry for freedom that first resonated through its satellite states. Today, across the Middle East, we are witnessing that same cry echoing from Cairo to Tripoli to Damascus, as old regimes are swept aside or cling to power through ever more brutal means.

Inspired by the courage and idealism shown by ordinary women and men fighting for basic freedoms across the world; enraged by the continuing evils perpetrated by authoritarian states, including genocide, torture, state-sanctioned violence, rape and starvation as an instrument of political repression, the imprisonment of thousands of men and women of conscience, the silencing of dissenting voices, the xenophobic persecution of minorities, the denial of freedom of thought, belief and worship; we, survivors of repression in our own countries of origin, recognize that human beings can be trampled, but their spirit can never be crushed.

At this decisive moment in the struggle for universal human rights, we celebrate the defeat of Libyan dictator Col. Muammar Gaddafi and of other brutal regimes in the surrounding region.

To the remaining tyrants and dictators around the globe, who have systematically violated the rights of their peoples, we give notice: Your time has passed. No more will the world suffer your specious arguments to justify policies and practices of abuse and repression in the name of claimed exceptions to the universality of basic human rights. Belonging to diverse faiths and cultures, and originating from all regions of the world, we, the authors of this Declaration, unequivocally reject such dishonest apologetics, which suit the interests of the despots, and not the interests, or ideas, of their peoples.

We assert that the writ of the Universal Declaration of Human Rights, adopted on 10 December 1948 by the General Assembly, continues to run through all societies, and for all times. The talk of tyrants is refuted by the cries of prisoners—who, from the dungeons of Burma, China, Cuba, Iran, North Korea, Pakistan, Tibet, Vietnam, Zimbabwe, and elsewhere—demand justice and freedom on the basis of these universal laws and eternal truths.

Therefore, in renewing the promise of the Universal Declaration of Human Rights, we call on the United Nations to make the dream of the four freedoms a reality. We urge the United Nations General Assembly to pursue a new agenda for human rights, and call for the Member States to:

· Remove tyrannical governments from special positions of power in the United Nations human rights system. Welcoming the United Nations suspension this year of the Gaddafi regime from the Human Rights Council, and the successful campaigns to prevent the election of Iran and Syria to that body, we call on the United Nations to continue on the path of reform, including by:

o Adopt the annexed resolutions on compelling situations of human rights that have hitherto been neglected or ignored at the United Nations;

o Champion the cause of civil society by speaking out against the persecution of human rights defenders and dissidents, and for the freedom of non-governmental organizations to advocate for an end to repressive laws and practices;

o Guarantee the freedoms of speech, the press, and assembly, being the lifeblood of democracy

o Condemn the ongoing censorship, harassment and imprisonment of Internet fighters for freedom and democracy;

o Defend women who are victims of state-sanctioned subjugation; and

o Protect children from ideologies of hatred and intolerance that promote contempt for fundamental human rights.

Signed on this 22nd day of September, 2011, at the opening of the 66th session of the United Nations General Assembly, for the We Have A Dream: Global Summit Against Discrimination and Persecution.