Documenting Cubans: Cuba and the Elephants 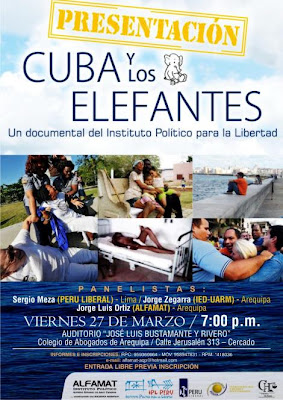 The Political Institute for Liberty (http://www.iplperu.org/) on March 18, 2009 premiered an important documentary 'Cuba y los elefantes' (Cuba and the Elephants) in Lima (Peru) to commemorate the anniversary of the 2003 Black Spring in Cuba.

On March 18, 2003 the Castro dictatorship initiated a massive crackdown where 75 Cubans became prisoners of conscience through summary trials in which they were sentenced up to 28 years in prison. Thanks to both domestic and international pressures over the years, the last of the 75 were out of prison by the spring of 2011. One of the factors that assisted in their release were documentaries such as Cuba and the Elephants which you can view below.

However the dictatorship in Cuba today remains as brutal as ever and right now two of the 75 find themselves again detained for trying to exercise their fundamental human rights: Angel Moya and Jose Daniel Ferrer Garcia.
Posted by John Suarez at 7:20 PM

Email ThisBlogThis!Share to TwitterShare to FacebookShare to Pinterest
Labels: Cuba, Cuba and the Elephants, documentary, repression