The Solidarity of the Shaken 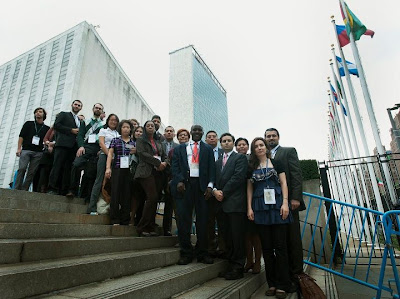 Activists, Dissidents and former prisoners of conscience gathered at the UN
Yesterday in New York City at the We Have a Dream Global Summit Against Persecution and Discrimination, in the shadow of the United Nations General Assembly gathering, the solidarity of the shaken was seen in action. Victims of persecution gathered to bear witness and testify against the permanent state of war waged against citizens in the dictatorships and totalitarian regimes they had suffered under.

According to Wikipedia Jan Patočka (who originated both the phrase and idea behind "solidarity of the shaken quoted in part above ) was both a brilliant Czech philosopher and one of the founders and main spokesman of the Czech dissident movement, Charter 77. He gave courses at the Underground University in order to offer a free and uncensored academic experience in the midst of communist Czechoslovakia. He died at the age 0f 69 on March 13, 1977 after a brutal 11 hour interrogation by the Czechoslovak secret police of what authorities described as "apoplexy." Apoplexy is defined by the U.S. National Library of Medicine as "bleeding into an organ or loss of blood flow to an organ." This was nine years after the Prague Spring was crushed by Soviet tanks and 12 years before the wonderful Velvet Revolution that nonviolently did away with totalitarianism and ushered many of Jan Patočka's friends, Vaclav Havel among them, into power in the space of ten days and begin a successful transition to democracy in that country.

On this blog the term, solidarity of the shaken, has been used on numerous occasions but never was it more relevant than today in New York City at this Summit Against Persecution and Discrimination held at the W Hotel on 541 Lexington Avenue over September 21st and 22nd. In a world where all too often it is the oppressors putting aside their ideological differences to collaborate in how engage in greater acts of terror against their respective populations it is a breath of fresh air when the victims of these regimes gather to denounce injustice and share experiences. In other words to practice the solidarity of the shaken. The other time and place where I've seen it in action was in the Czech Republic at Forum 2000 in 2009 a meeting organized annually by Vaclav Havel.

Not all the speakers were victims of persecution, for example David Keyes, Executive Director of Advancing Human Rights who gave an important presentation on NGO Strategies for Helping Human Rights Defenders and he immediately caught my attention when he spoke of Anatoli Marchenko, who had died after a long hunger strike in the Soviet Union. Contrasting Marchenko he spoke of the example of Natan Sharansky and how rather than dying on hunger strike he was released. He then went on to cite Elena Bonner who said that "the only real defense for us and everyone fighting for human rights is publicity." Thanks to UN Watch his entire presentation is available below and a must for any serious activist or aspiring leader.

A second speaker, Nasser Weddady, Anti-slavery activist in Mauritania offered an overview of the challenges facing human rights activists and concrete things that civil society can do to hold both Western countries and international human organizations accountable when dealing with repressive regimes.

However, it was the voices of those who had suffered persecution and discrimination that impacted emotionally throughout the day and at the same time offered insights into the repressive natures of these regimes. Listen to their testimony and spread the word to others to watch these videos. If you do this you will be engaging in positive action and joining this network of the solidarity of the shaken.
Burma

Yang Jianli, Former Chinese prisoner of conscience and founder of Initiatives for China on "Crackdown in China: Jasmine Revolution and the Arab Spring"


Fidel Suarez Cruz, Cuban dissident and former prisoner of conscience speaks on "Castro's Cuba: Police State on the Caribbean" (Spanish) [Cuban blogger Yoani Sanchez was also able to address the Summit via telephone from Cuba for five minutes and her remarks were interpreted to English]


Ahmad Batebi, Former Iranian political prisoner on "Iran: Lessons from the 1979 Revolution" and his experience in prison. In addition a message from Ayatollah Boroujerdi currently jailed in Evin prison in Iran was read.

Young Ae Ma, North Korea defector speaks on"My Years in North Korea" and described how her husband was publicly executed in retaliation for her defection from North Korea and promoting human rights there.


Ngawang Sangdrol, Tibetan nun and former prisoner of conscience on being "Jailed for Singing Songs of Freedom"

If you are not in New York City and want to watch the Summit live via video stream starting at 9:00am on Thursday then visit the website http://ngosummit.org/stream.php and join in the solidarity of the shaken. History has demonstrated that delegating responsibility to politicians and unelected bureaucrats without holding them to account is a recipe for disaster. The United Nations is but another example. The future of human civilization depends on individuals holding those with power accountable.
Posted by John Suarez at 1:17 AM