"I suggest that whenever a human rights defender is suffering, we should hold massive press gatherings to free the defender and lead proper investigations into their arrests." - Natalia Estemirova, September 2003 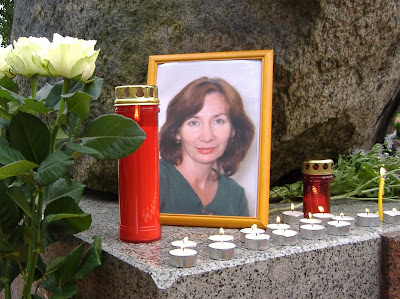 The news that someone had been charged today with the 2006 murder of Russian investigative reporter Anna Politkovskaya brought Natalia Estemirova to mind. Never met Natalia Estemirova and thanks to some unknown thugs I never will. She was a human rights defender in Russia defending the rights of the people of Chechnya. On July 15, 2009 she was abducted at around 8:30am local time. Natalia was dragged into a white car (VAZ-2107) and driven off in an unknown direction. According to witnesses, Natalia Estemirova managed to shout out that she was being abducted. According to staff members of Memorial, she was on the way to a business trip to the Stavropol region of Russia. Her colleagues started to worry when she didn't arrive at the scheduled meetings. The same day at approximately 5.20 pm, Natalia Estemirova was found dead near Nazran in Ingushetia with evidence of two shots to the head.


Amnesty International has a campaign now underway for Natalia Estemirova

Speaking in Germany on July 16, 2009 as her funeral was being held in Chechnya, Russian President Dmitry Medvedev promised a thorough investigation and pledged those responsible would be caught, reported the BBC at the time also observing that Medvedev said it was "obvious" to him that her murder was linked to her professional work. Forty days after her murder friends gathered in the Caucasus to remember Natalia.

Natalia Estemirova was one of the leading researchers in the Grozny office of the Russian human rights organization Memorial. Since 2000 she had exposed numerous human rights violations committed during the second Chechen conflict and documented extrajudicial executions, enforced disappearances, torture and other human rights violations committed by law-enforcement agencies and government officials in post-conflict Chechnya. She was fighting injustice and refused to leave the Republic despite the criticism and frequent threats she received from Chechen officials.

There is a link of solidarity between Natalia Estemirova and Cuban exile activists and that is the Russian human rights organization Memorial. Back in 1997, a member of the student group Free Cuba Foundation visited Russia and met with members of Memorial who joined the campaign to obtain the freedom of a Cuban political prisoner by the name of Armando Alonso Romero, a member of the Cuban Committee for Human Rights. Thanks to international solidarity he was freed a short time after the campaign began. This act of solidarity with an imprisoned human rights defender was in keeping with Natalia Estemirova's core beliefs expressed in testimony she gave in September 2003 at Steps to Protection: The Second Dublin Platform for Human Rights Defenders, organized by the Irish nonprofit Frontline where she wrote about Zura Bitieva, a human rights defender who had been murdered along with her family. Natalia's testimony is reproduced below:

I would like to tell you about a woman of whose life and death, I believe, the people must know.

Her name was Zura Bitieva. She lived in a small Chechen village. During ‘95-‘96, when the Russian army occupied Chechnya, she was actively involved in anti-war protests. She was not afraid of the fatal consequences. In 1999, the Russian army again invaded Chechnya, and in February 2000 she and her son Idris, were taken into the Chernokozov prison by a Russian soldier. Conditions of this prison were appalling in their brutality. Torture, killing, assault and human degradation were all part of this institution.

Zura was a small, aged and very sick woman. But her soul and the strength of her spirit, withstood the threats and beating of her captors. She defended other inmates in prison, with this strength. Zura went on hunger strike. She was released in a very ill condition. Her friends helped her go to Turkey. But once her health was slightly better, she went back to Chechnya, and began collecting evidence of crimes committed by the Russian soldiers and militia against the peaceful citizens of Chechnya. This evidence she submitted to UN and organizations for human rights. In the middle of a spring night 2003, her house was broken into by camouflaged and masked men. These men were part of the Russian forces. They killed her, her son Idris, her husband and her brother. Her one year-old grandson was gagged and left in a puddle of blood. Only her other son, escaped death by hiding in time.

Half a year passed, and the crime has still not been investigated.

Exactly two years before this event, Islamic fundamentalists in conjunction with the Russian forces, mortally wounded human rights defender Viktor Popkov. Still, the killers have not been brought to justice, even though this is quite possible.

In spring this year, men in camouflage and masks kidnapped a defender Imran Ezhiev. The press raised a storm, and after a few days Imran was dropped and left on a dirt road. To this day, he does not know where he had been, as he was gagged and cuffed. But he does know that his kidnappers were part of the Russian forces. He was saved by the press outcry.

I suggest that whenever a human rights defender is suffering, we should hold massive press gatherings to free the defender and lead proper investigations into their arrests. I also think that the Frontline website should have current and detailed information and news of human rights defenders – to be discussed by participants of this conference.