Scenes from the Sunday crackdown in Palma Soriano, Cuba 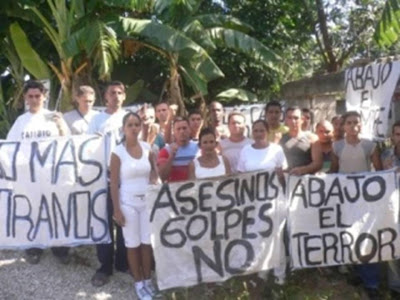 Members of the Patriotic Union of Cuba (UNPACU) in Eastern Cuba with signs that read "No more tyrants", "Murderers - Beatings - No" and "Down with Terror" photo from Luis Enrique Ferrer's facebook page.

Over the past weekend the dictatorship in Cuba carried out repressive actions in Eastern Cuba and courageous Cubans responded by demonstrating against the violence. This stand led to them also becoming targets of regime violence as the videos below demonstrate.

Most of the international coverage has focused on the brutal assault on the Ladies in White earlier in the day but there was more and now there is video of what happened at one of the home's were a demonstration took place at the home of Marino Antomarchi Rivero on Sunday, August 28, 2011. CNN reported on the context in which events unfolded:

During the past five weekends, the government has strongly repressed peaceful protests in several eastern cities, said Elizardo Sanchez, the head of the island's unofficial Commission for Human Rights and National Reconciliation. In at least one case, in the town of Palma Soriano, forces used gas -- either pepper spray or tear gas -- against one family, Sanchez said.

In one of the most recent incidents, on Sunday morning, a group of female dissidents were beaten and detained as they headed to Mass at the Palma Soriano's cathedral, Sanchez said. In protest of this act, two dissident groups declared they would hold closed-door vigils in certain homes, he said.

On Sunday evening, one of the homes was raided by riot police, Sanchez said. The government forces mistreated the 30 people at the home and destroyed many of the home's furnishings, he said.

Now Antomarchi Rivero had already been detained two days before but opposition activists on Sunday were gathered in his home when it was assaulted twice by state security and riot troops equipped with shields, rifles and tear gas who beat and detained 27 activists. During the second assault cameras and cell phones were seized and a number of images and videos were lost but not all. Video footage is from the UNPACU youtube account and offers sounds and images from Sunday. Including the after effects of a gaseous substance launched into Antomarchi's home by regime agents.

"These are the names of our detained brothers and sisters" concluded Jose Daniel Ferrer Garcia. He then went on to add that "Marino Antomarchi Rivero and Jorge Cervantes Garcia who were detained since Friday. The detention of activist Guillermo Cobas Reyes was captured on video.

On Tuesday, August 30, 2011 both Marino Antomarchi Rivero and Jorge Cervantes Garcia were released but learned of three other detainees of the Campa family. That means that the total number of activists still in detention as of Wednesday, September 1, 2011 in Palma Soriano is 30. According to Jose Daniel, the majority of the detainees are being held at the Versalles Unit. He ventures that those still detained have not been released to give time for their wounds to heal to avoid having them documented.

One week ago, Jose Daniel Ferrer Garcia together with other opposition activists who desire to achieve democracy in Cuba, founded the Patriotic Union of Cuba (UNPACU) that has as its principal objective the massive growth of the nonviolent struggle for democracy on the island. UNPACU describes itself as nonviolent but not passive and backed up their words with action.

Thanks to a combination of social media, video technology, courageous and imaginative activists the brutal practices of the regime in Cuba are being exposed to the world. The Patriotic Union of Cuba (UNPACU) in the space of a week has generated some of these images.