The Virgin of Charity Unites All Cubans

“Do not be afraid! Open. Open wide the doors for Christ! Open the borders of countries, economic systems, and civilization’s path to His saving power. Do not be afraid!” Pope John Paul II, October 22, 1978

Photos taken by the author in Miami on the left and on the right in Havana by Pedro Luis Castro of Fotos desde Cuba
In the pictures above taken, one in Miami and one in Havana, on the same day Cubans gathered to pray and worship for the Virgin of Charity also known affectionately as "Cachita." The Virgin of Charity of El Cobre, Cuba unites Cubans inside the island and in the diaspora. In both places last night the calls for a free Cuba could be heard among those attending. Not to mention all the prayers for a free Cuba where human rights are once again respected.

Unfortunately, in the totalitarian dictatorship that is Cuba today such verbal expressions invite the regime's repression in an effort to provoke fear. Yoani Sanchez in a blog entry titled, The Queen on Queen Street,describes part of what went on yesterday in Havana:

Just at the moment when the “Queen” was turning into Queen Street, someone pulled out a poster with the word “Freedom.” It was just a second, but enough to live in anticipation — a biopsy in advance — the horror. People running, the plain clothes cops launching themselves at the hands that grasped that paper, and the contorted face of the priest, fearing the worst. For an instant, the image teetered among the petals placed around her. And then came the calm, the fear, the whispered prayers. One old woman said, almost as a lament, “Don’t politicize the procession, they won’t let Cachita out next year.” Madam — I wanted to say to her, but I kept quiet — if she is, as they say, the Virgin of all Cubans, she will accept us whether rebellious or tranquil, apathetic or protesting, whispering our prayers or shouting our discontent.”

Miami
For the past four centuries, since the Virgin of Charity appeared to the three Juanes in the Bay of Nipe in 1612, She has been a source of popular devotion among Cubans and on May 10, 1916 forever linked with Cuban independence when Pope Benedict XV proclaimed Her Patroness of Cuba in response to a request by veterans of the Cuban war of independence. Since then She has also been known as the Virgin Mambisa. Since 1959 she has accompanied the Cuban diaspora. 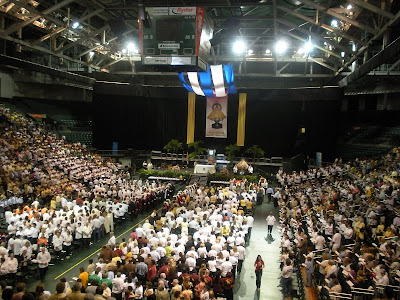 Miami
Over the past fifty years in the midst of the dark night of totalitarianism in Cuba the Virgin of Charity is a profound and concrete presence in the hearts of Cuban exiles made manifest at Our Lady of Charity - La Ermita de la Caridad built in Miami facing Biscayne Bay.

Valencia, Spain
Around the world, in places such as Spain, Cubans gathered yesterday to honor the Virgin of Charity of El Cobre and hold public processions. Sadly at the El Cobre Basilica, just outside Santiago de Cuba, built to house Her miraculous statue in 1927, the dictatorship again carried out an act of repression. Two dozen Cubans were detained, including Ladies in White, in order to prevent them from peacefully marching after Mass outside of the Church and in a public space for their loved one's freedom.