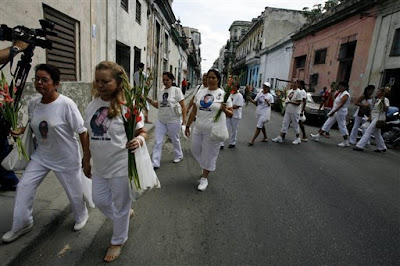 Ladies in White harassed and detained in Cuba again this Sunday

Today, regime agents were at it again detaining Ladies in White and their supporters, to prevent them from attending Mass. Laura Pollán, spokeswoman for the Ladies in White was detained in Colón, Matanzas on her way to join with women attending Mass there and returned to Havana. Others were detained, according to Yoani Sanchez, among them Jose Alberto Alvarez whose wife can be reached at +53 53341878 to inquire about his whereabouts. The regime is advertising ahead of time its continuing violence against nonviolent Cuban activists such as the Ladies in White. As usual the dictatorship blames the United States as the cause for the women's protests not that their loved ones have been unjustly imprisoned and deserve to be free. News bureaus remain mute on this ongoing story. Thankfully international human rights organizations such as Amnesty International, Frontline, Human Rights First have not remained silent and along with a few international media outlets reported on what is taking place.

The beatings carried out last week led to the hospitalization of one of the activists spitting up blood for days following the brutal attack reported human rights defender and former prisoner of conscience Jose Daniel Ferrer Garcia above. Martha Beatriz Roque over twitter identified the activist as Nivaldo Amelo Ramirez and the hospital he was admitted to the provincial hospital Saturnino Lora.

Ten activists continue detained in inhumane conditions after last weekend's repression and Ladies in White and continue to suffer harassment from state security agents reported Jose Daniel Ferrer Garcia above. None of this has been reported by the news bureaus in Cuba.

However, there is now light into what is taking place in the lack of coverage. According to an Associated Press story, several correspondents on the island in recent months, who have been reporting in an impartial manner, have had their credentials revoked. The latest is Mauricio Vicent, correspondent for EL PAÍS and Cadena Ser, a winner of Spain's 1998 International Press Club award for best work.

This sends a chilling message to serious reporting on the island which explains why, while the Ladies in White and other activists have been brutalized by agents of the Cuban dictatorship and large crowds of Cubans have responded denouncing the regime agents, there has been little coverage of these newsworthy stories.

In conclusion, the dictatorship's strategy is one of more repression and more intimidation against nonviolent activists and the press that should be covering them. The response by people of good will is to denounce both and highlight what is taking place. One way to do it is to take action with Amnesty International.