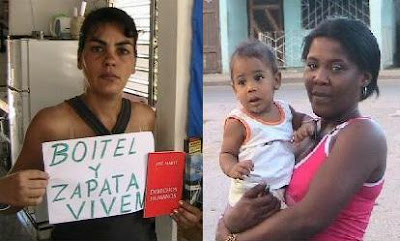 Sarah Marta Fonseca Quevedo (Left) Yris Tamara Pérez Aguilera(Right)
This past Saturday September 24, 2011 Cuban women were targeted by the dictatorship's state security apparatus. Images of the Ladies in White attacked by a mob bussed in by the regime were photographed and news of it made the international wires. Even if some of the articles tried to downplay the violence.

However, the fate of a number of other brutalized and detained activists went unnoticed by the international media. Two of them at this moment continue to be imprisoned and activists fear for their well being in addition to the possibility of a show trial followed by an unjust prison sentence or a mysterious death following their release. Their names are Sarah Marta Fonseca Quevedo and Yris Tamara Pérez Aguilera. Both are mothers, wives and human rights defenders. Sarah Marta Fonseca is president of the Pro-Human Rights Party affiliated to the Andrei Sakharov Foundation in Havana and Yris Tamara Pérez Aguilera is the president of the Rosa Parks Feminist Movement for Civil Rights and based in Placetas.

Both women have been beaten up and detained in the past for defending the human rights of others and exercising their own. Beaten up badly enough by Cuban state security agents to suffer both physical effects long after wards.

Just a few weeks ago, on August 23, 2011 Sarah Marta Fonseca Quevedo took to the capitol steps in Havana in a public demonstration that attracted international attention. Below is footage of the protest.


Along with another clip of interviews with three of the four women who participated in the public protest. One of them being Sarah Marta Fonseca Quevedo.


The Cuban Democratic Directorate reported that "[a]t approximately 6:00pm on September 24, as Resistance members prepared to engage in a nationwide pots and pans protest scheduled for that night" when state security agents organized a repudiation rally outside the home of Fonseca Quevedo, where several activists were attacked, beaten, and detained. Among these were: Sarah Marta Fonseca Quevedo, her husband Julio Ignacio León Pérez, Jorge Luis García Pérez “Antúnez”, Hermógenes Inocencio Guerrero Gómez, Ramsés Miranda Camejo and Eriberto Liranza Romero. Hablemos press captured the act of repudiation and the attacks on Sara Martha by two attackers. First by an unidentified man who charged at her and secondly by a woman who started hitting her from the back. She managed to evade her attackers only to see that her husband had been knocked to the ground and was being kicked in beaten by a group of state security agents. She runs over to try and break it up, but instead is detained and badly beaten.

According to Sara Marta's son, Julito León Fonseca, in a telephone interview in which he outlined his parents’ situation stating "that they want to try them for 'Contempt' and 'Assault', which is not true. [...] As of now, I know that my mother is being held at Cuarta del Cerro, and my father [...] at El Capri. [...] The information about my mother reached me thanks to Odalis Caridad Sanabria, who contacted a person who was being held at Cuarta del Cerro. This person added that my mother was so badly beaten that she could barely stand. It seems her spinal column sustained an injury caused by a blow delivered by State Security".


The next day according to a communique from Jorge Luis García Pérez “Antúnez” [no longer detained] was made public on Tuesday, August 27 that describes what happened to his wife, Yris Tamara Pérez Aguilera: [S]he was violently arrested together with other nonviolent activists Donaida Pérez Paceiro, Yaimara Reyes Mesa and others as they carried out a nonviolent demonstration in the neighborhood of Río Verde demanding the release of Sara Marta Fonseca Quevedo and a dozen activists arrested the day before. According to activists and other eyewitnesses, the police began beating and kicking protesters with particular intensity against Perez Aguilera in a brutal and sickening manner. The director of the feminine organization, Mari Blanca Ávila Expósito, detained together with Yris in one of the dungeouns of the famous police station October 10 and Aguilera that she saw her extremely beaten up and in very bad conditions. More worrisome still, she was a witness of how at noon yesterday Yris in a very poor state was transferred to whereabouts unknown.

Despite all of this, a small group of the Ladies in White, made it to Mercy Church on Saturday and marched on Sunday to Santa Rita Church. The picture below is from Sunday's march and was taken by Fotos Desde Cuba. 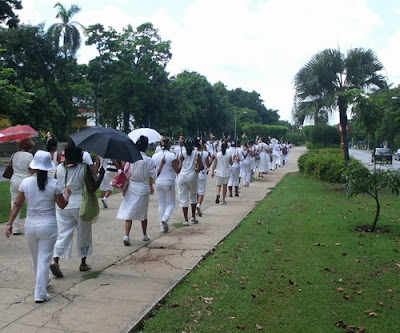 Please speak out for these women who are risking all for human rights, dignity and freedom.
Posted by John Suarez at 1:23 AM