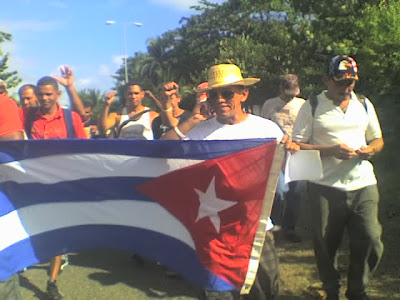 Immediately following the above tweeted message Luis Felipe sent another which was just a url that linked to the picture he had taken and posted (reproduced above). The young man wearing the yellow hat and sporting the sunglasses is opposition youth leader Rolando Rodriguez Lobaina.

The Cuban Democratic Directorate interviewed Rolando Rodriguez Lobaina, prior to his Monday detention, and obtained an official statement outlining the purposes of this march, which is still ongoing:

"The idea is to transit along the same paths that Maceo did in the invasion from East to West, but in this case, we will send a message of peace, hope, freedom and claim to those who have misgoverned us over half a century. In a peaceful manner, we will convey the spirit that today, in these times, the Cuban people and the nation are calling for a space that is democratic and of liberty. "

The National March for Freedom "and Zapata Boitel Live" will take as its route the central highway and has no end date.

"The flame should be taken to Mantua, at least, Pinar del Rio, in western Cuba," Rodriguez said Lobaina.

The objectives of the march are:

1) that the regime in Cuba respect, promote and publish the universal declaration of human rights, ratifying international covenants of these rights.

2) That it cease the repression against the opposition and the people of Cuba.

3) Freedom without exile for all political prisoners, repeal of the legal framework that fosters these imprisonments.

Originally the march had been planned for September 8 but organizers and participants began to be detained by State Security agents the day before. 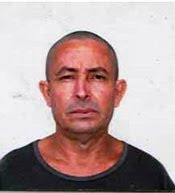 On hunger strike: Ramón Velásquez Toranzo
One of the activists detained and held over the weekend, for wanting to march, was former prisoner of conscience Ramón Velásquez Toranzo. He declared himself on hunger strike the moment he was arrested and even though he is now been released continues refusing to eat food. His daughter, Rufina Velázquez @RufiVCuba, has tweeted her father's demands:

Threatened again with imprisonment if he dares to step outside his home. He has decided to go on hunger strike. Principal points of his protest, respect for all human rights. Respecting right to walk freely for our country.Respect for the right to request respect. Respect for the democracy that on one day you signed. Respect that we are humans that we are nonviolent pacifists. That a UN representative visit the island and interview Cubans in order to measure and document human rights violations committed each day.

These detentions did not end the march but delayed its start by four days. Although the participants were arrested moments later on the morning of September 12 they had achieved their aim: the march is underway in Cuba.

Many of the organizers and participants would again spend at least a night and jail subjected to threats of long term imprisonment. Rolando Rodriguez Lobaina @LobainaCuba tweeted that during his detention: "Political police threatened me with 20 years in prison according to them if I continue promoting peaceful marches. They fear the people will join."

Finally, Rolando asked for friends and followers to re-tweet the following message translated to English and reproduced below:

TR @LobainaCuba TO FRIENDS & FOLLOWERS I ask you to divulge this: We will continue taking to the streets and asking for freedom and rights in #Cuba

Another of the marchers Jose Daniel Ferrer Garcia this evening reported on the fate of one of his compatriots who participated in the march and remains detained tonight:

TR @jdanielferrer Recently out of a cell yesterday Angel Moya was newly detained in Holguin. There he remains. What fear the tyranny has of a peaceful march!