Father Miguel Angel Loredo: “I enjoy this life. It all has been a blessing.” requiescat in pace

“I discovered St. Francis of Assisi when I was 16 years old and realized this is what I wanted for my life.” - Father Miguel Angel Loredo, Holy Name Province Today Newsletter August 18, 2010 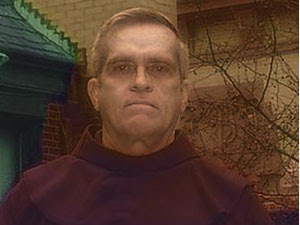 First learned about the case of Father Miguel Angel Loredo when I saw the 1987 documentary Nobody Listened co-directed by Néstor Almendros and Jorge Ulla and at 8 minutes and 13 seconds in the video below you can listen to an excerpt of his testimony in a parallel forum in Geneva from that documentary.

Eleven years later four days prior to Pope John Paul II's visit to Cuba I had the opportunity to meet and spend time with Father Miguel Angel Loredo over the course of a weekend of conferences and activities to highlight the voice of the Cuban dissident movement in a gathering titled "L'altra Cuba: le voci della dissidenza" org. dalla Associazione Cuba Libera" [The other Cuba: the voice of the dissidents organized by the Cuba Libera Association]. Over the years I was blessed to run into him at different Cuba venues and engage him in conversation.

The gatherings were usually with other former political prisoners and within a context of advocating for Cuban freedom. However, it was at that first meeting where Father Miguel Angel Loredo together with Mario Chanes de Armas and Ricardo Bofill sat down with Dariel Alarcon Ramirez a.k.a "Benigno", the man who had been their jailer in Cuba. These men led by Father Loredo offered an example of true reconciliation. Experiences were exchanged, injustices highlighted and the brutal history faithfully reconstructed by all parties. It was a painful process but one in which truth was highlighted and at the same time all of them signed onto a petition requesting that Pope John Paul II intercede on behalf of Cuba's political prisoners. 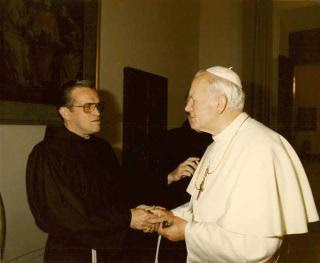 Father Miguel Angel Loredo with Pope John Paul II
In Matthew 7:15-7:16 the Gospel states "Beware of false prophets, who come to you in sheep's clothing but inwardly are ravenous wolves. You will know them by their fruits." From the very beginning, truth has often been a casualty of the communist regime in Cuba. In addition to fabricating falsehoods against Father Loredo the communists also distorted and twisted the life of a catholic martyr. Five years prior to Loredo's arrest on September 10, 1961 a catholic youth, Arnaldo Socorro, age 20 , was shot in the back by a member of the communist militia in front of the Church of Our Lady of Charity of Cobre in Havana as he carried an image of the Virgin of Charity. But in order to fool public opinion at the time, the regime buried him with the honors of a communist militant.

Father Miguel Angel Loredo is a formal adversary of the dictatorship in Cuba because he understands that one of the most formidable weapons against injustice is objective truth. In an excellent article in El Nuevo Herald by Juan Carlos Chavez, this man of the cloth explained the importance of objective truth within human rights reporting:

"I believe we should denounce the evils of both the right and the left. I find selective denuncation, that has political roots repugnant. If you believe in the integrity of the human being you must believe deeply in objective denunciation. Without objectivity, there is no hope.

EWTN published the following brief account of the life of Father Miguel Angel Loredo in English:

Fr. Loredo was born in Havana in 1938. When Fidel Castro rose to power in 1959, young Miguel Angel had already decided to become a priest. He traveled to Spain where he was ordained on July 19, 1964.

One month later he returned to Cuba, where the tense relations between the Church and new Communist government resulted in the expulsion of 131 priests in 1961.

Fr. Loredo was sent to the Church of St. Francis in Havana. He was also pastor in the city of Guanabacoa. However, his fiery sermons against atheism and Communism enraged Cuban officials who accused him of being a spy for the CIA, hiding weapons and participating in a counter-revolutionary conspiracy. He was arrested in 1966.

Fr. Loredo always maintained his innocence, but after a fraudulent trial he was sentenced to 15 years. He spent time in numerous prisons, where he underwent forced labor and beatings for not accepting the “re-education” that the government tried to force upon him.

In a letter dated June 11, 1968, Fr. Loredo told Msgr. Cesar Sacchi, at the time the representative of the Apostolic Nunciature in Havana, that he felt “proud to participate in this struggle with thousands of men of great courage and patriotism like those in this Cuban prison. … I also want to tell you that I am sorry to see how the free West has forgotten us, how everyone is silent and indifferent, except for the complaints of helpless loved ones.”

On February 2, 1976, he was released and ordered not to speak in public or give interviews to the press. However, the government would not accept his appointment as professor of theology at the Seminary of Sts. Charles and Ambrose in Havana, and he was exiled to Rome in 1984.

In 1987 he moved to Puerto Rico, where he continued his ministry, with Cuba and the struggle for human rights always present in his work. In 1991 he was sent to the Church of St. Francis in New York.

In 1998, Fr. Loredo was chosen to be part of a group of priests who would travel to Cuba for Pope John Paul II’s visit. However, the Cuban government refused to allow him to enter the country.

Abel Nieves Morales, one of many prisoners who shared a cell with the priest, said Fr. Loredo “was a very courageous man, firm in his principles and in his faith, and who never ceased to raise his voice to denounce the horrors … in the prisons of Cuba.”

The EWTN article got one fact wrong, although an understandable error considering that Miami is the capital of the Cuban exile community. They reported that Father Loredo had passed away in Miami, when in fact he had passed away in St. Petersburg, Florida at the age of 73.

Diario Las Americas reports that on Wednesday, September 21, 2011 at 8:00pm a Eucharist will be celebrated at Our Lady of Charity (La Ermita de la Caridad) located at 3609 South Miami Avenue Miami, FL. 33133. Family members, friends and all those who admire and celebrate his life and his commitment with God and with a free Cuba are invited to participate. What better way to remember him?

requiescat in pace
Posted by John Suarez at 3:15 AM